Showing posts from May, 2016
Show all

The Price of Curious Rebellion 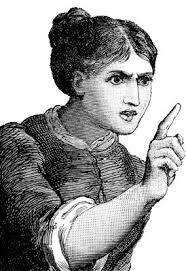 I have another life lesson story to share with you.   This one is on the lighter side. Perhaps I'll reveal my darker secrets in that lurid expose' I plan to write someday... This true story happened when I was about eight. I was staying at my Grandma's house, as I often did.     I had taken one of her old-fashioned metal ice trays from the freezer. I loved popping ice out of it, even though my little hands could barely pull the lever back.  I am not sure what I was doing or what I said, but I do remember my grandmother's warning "Now be careful! Don't ever put your tongue or lips on that, because you will stick to it!!" How did she know that I really wanted to lick that white frost off the side of the tray? Was she a mind reader? You can predict what happened. I just had to find out for myself! Of course I waited until Grandma was on the other side of the house. The next thing I knew, my tongue was stuck and I was stifling panick
Post a Comment
Read more 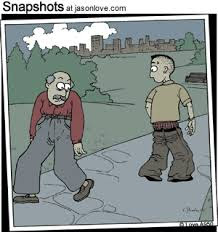 I was walking into the grocery story the other day, and happened to get right behind the cart-pusher guy doing his job. He had just wrangled a chain of carts from their metal cage. You know, many carts linked together are very heavy! He was getting his OOOMPH going, for the needed momentum to push them the distance to the store entrance. Just as he puuussshhed them with all his might, his baggy saggy jeans fell down to his knees! It was hard for him to stop the rolling carts with his pants restricting his movement. But stopped them he did, and then turned around to see if anyone was watching as he pulled his jeans up. I was standing right behind him.  He turned red and laughed sheepishly, "Oh, sorry." I said "Well, It's okay. I have a son who is a few years older than you. He went through the baggy jeans phase, but I don't think his ever actually fell off. Oh, and nice boxers." He just laughed again. I did too. I added "You might remember
Post a Comment
Read more 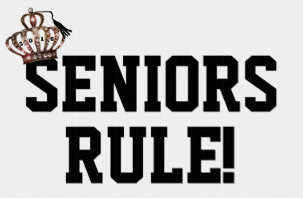 It's that time of year again...graduation!     When you read my title, I'll bet you thought I was talking about us older folks being naughty. I am over fifty now so I am considered a senior citizen in some places. No. I'm talking about high school Seniors, and I have a memory to share. One morning in May of 1981 (my graduation year), the faculty and staff were having a meeting in the library before school started. The library was situated in the middle of the building, the halls and classrooms formed a big square around it.  It had double doors, the kind with big, open handles that pull open outwards. The entire front entrance was glass. A few seniors realized that ALL the faculty and staff were in the library. Someone found a long board and stuck it through the door handles, which made it impossible to open them from the inside. Totally gnarly!! We had imprisoned our teachers! There was that unforgettable moment when our authorities realized that they
1 comment
Read more
More posts