"But you don't seem like the type of person who would be a bowler."
Hmm. I'm fairly sure my new friend meant well. But I never found out his reasons for saying that to me. His comment made me think.

I've been bowling in leagues for about twelve years, off and on.
I'll tell you what kind of people bowl.

Inexperienced, bad bowlers do. Some of them don't even know what weight their ball should be. What about technique? Technique-schmechnique! They just try to keep the ball out of the gutter and hit some pins occasionally.

That describes my bowling skill level in 2006, when a friend invited me to join her team. I initially declined, saying "I'm no good! I'll bring you all down!" But my friend persisted and insisted. She assured me that she had a very low average too, but none of the others cared.
They were all doing it just for fun.

So I reluctantly agreed to join their all-women team. I'll admit, though, it was exciting to try something new! I'd let myself get too comfortable in my ruts.

I was not disappointed. My girls made me feel so welcome and I thoroughly enjoyed myself! I learned some basic scoring and lane etiquette, and yes, I even improved my technique. That was the beginning of my career as a middle-aged athlete.

So- what other types of people bowl?

There are the very serious folks who bring wheeled bags containing several specialized balls. They consistently roll games which are well above 200. They don't talk much while competing and they rarely crack a smile.

I appreciate the huggers. These are the league peeps who seem to know everyone. When they aren't bowling, they make the rounds to all the teams and give pats on the back, smiles and hugs to all their buddies. It's a camaraderie thing!

Beer drinkers? What? On bowing night? Well, of course!
There are plenty of people who don't indulge at all. And the majority of those who drink do it very responsibly. However...

I remember the guy who became a disco king after a few cold ones. He'd start the night standing at his team's table, tapping his foot and swaying to the music. By the third game, he'd be in a conspicuous spot, doing a pelvic thrust dance. NOOO! What's been seen cannot be unseen!!

People of all ages bowl. One of the best bowlers I've ever seen was thirteen years old. I'd watch in awe as he rolled strike after strike. He rarely missed and he made it look so easy!

Just a few weeks ago, I met a friendly woman on our opposing team. I learned that she is 98. Yes- two years under 100. (I thought I heard her wrong the first time.) Inspiring!

There are wealthy bowlers and there are some who can't afford their own ball or shoes. There are friendly ones and snobby ones, business owners and unemployed. And everyone in between.

I sure appreciate this sport and the variety of interesting, terrific people I've met through the years. I've made a couple of very close friends and many fun memories!

And for the record...
Pre-school aged tots are the most adorable bowlers of all, with their short legs and tiny bowling shoes. It's so cute to see them lugging the ball to the lane, dropping it with a loud clunk, then puuushing it with all their might.
A pin fell! YAY!!


So you see, there is not a "type" of person who bowls. Well, on second-thought, maybe there is. I think it's for the "people-person" types, like me.

The elderly woman cautiously maneuvered her walker into the small lab area of the doctor's office. I took her arm and gently helped her sit down. A familiar, friendly nurse approached her and asked "What finger should I use to get your blood sample today?"

"Oh it doesn't matter.", the white-haired patient replied. The nurse took her middle finger and started to clean it with an alcohol pad. Suddenly, the lady jerked her hand away. "Not that finger!" she blurted. "That's the one I always use when I'm out in traffic!"

The nurse just stood there with a shocked expression as her patient waved her middle finger in the air. When she laid her hand back down on the table, she had a twinkle in her eye and a cheeky smirk. The nurse visibly relaxed, then chuckled. So did I.

The elderly jokester was my mother-in-law. I think she was 89 at the time.

"Cheeky" is not a common term here in the US, but one definition I found describes …
Read more

The anticipation hung in the air that evening. We breathed it in and felt giddy as we finished getting dressed for our date.

I wore a fancy dress, tights and shiny Mary Jane shoes. White gloves too, for the very first time!
My date and I were preparing to go to a concert. I was joyfully excited about it, even though I had no clear idea of what to expect. I'd never been to a concert before. I was only six years old.
Ray Charles was performing in our smallish town on that unforgettable night in 1969. It was a very big deal! Ray Charles!

Mama wanted me to experience the magic with her. She understood that we might not have another opportunity like it again.

It was a rare for Mom to indulge in special events like that. She was a single woman with two young children, struggling to make ends meet.

Honestly, I don't remember much about the performance.
I have foggy bits and pieces in my memory bank: holding Mama's hand as we hurried from the parking lot to the huge auditorium,…
Read more

The Gift of a Name 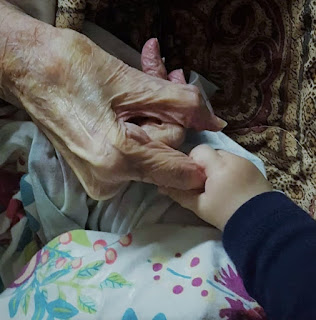 What's in a name? Why do labels exist? Do they have any true significance in a person's life?
We called her Mom and Grandma. What a privilege it was to do so!

She died just over a year ago. We've taken these past months to reflect on Mom's life journey and what she meant to our family.

Through the years, Mom shared tales of growing up during the Great Depression. She was the middle child with four siblings. They were known as one of the poorest families in their community. There was some shame attached to that reputation, of course.

Mom was often treated unfairly, especially when she was young. In fact, she was verbally and emotionally abused by the ones who should have protected her. "Dumb" was a common title for her while she was growing up, although she very intelligent indeed.

I admired my mother-in-law immensely, because she didn't allow her harsh beginnings, nor the …
Read more