July 08, 2017
I didn't know whether to laugh or cry. I felt so embarrassed for the man who was giving the seminar. His bright red polo shirt was certainly attention-grabbing! Especially the part of it that was sticking out in front, through the open fly of his khakis. It was like a little crimson flag.

My husband and I were like two children being naughty in class. We were whispering and giggling "I don't think we will remember much of what he is saying!" "Someone should tell him!" "Don't stare at his crotch!"

The poor man did fix his problem after he finished his talk, before he started the question and answer time. I wonder how long he had cringing nightmares about that experience? Hopefully, it became a funny memory for him eventually.

After grocery shopping last week, I noticed something dark on my peach shirt. Eyeliner! It was at the top, a few inches below my chin. No big deal really. I just didn't like the thought of running around the store for 30 minutes with a black smudge, right in front for all to see. Ugh!

While applying stain remover to it later, I remembered a more awkward shirt problem that happened many years earlier.

About 26 years ago, I was shopping with my one year old daughter and her four year old brother. Our outing had taken about an hour.

When we got home, I looked in the mirror and noticed that something didn't look quite right. Lop-sided! Kind of lumpy too.
"OH!! How long has THAT been there?!" I had put my baby's pacifier in my t-shirt chest pocket. Nipple side sticking out, of course!

Hmm, I'd wondered why a few people in the store had given me strange looks...

I suppose I wouldn't have really expected one of my babies or a stranger to tell me about that. But if my husband or a friend had been there, I think they should have! I would hope that anyone who knows me would try to save me from potential humiliation! Right?

A few years ago, I was having a particularly bad day at work. So I welcomed my lunch break even more than usual that day.

A minor crisis occurred and my employer called me to help. So, I gobbled down one more bite of my spaghetti before going back into work.

We all got through the hoopla. Then I finished the last three hours of my shift, which were almost as hectic as the first part of the day.

Finally, at 3 pm, I had the chance to stop in the restroom before going home. When I was washing my hands, I saw something on my cheek. Closer inspection and turning my face to the side revealed a straight line of spaghetti sauce. Oh yes! From the left corner of my mouth to my ear lobe.

How did my co-workers miss that? And if they saw it, why didn't they tell me?
Well, I decided that maybe they were as busy as I was all afternoon and simply didn't notice my lovely new look.

Once again, I wasn't sure whether to laugh or cry as I stood at the sink looking at my saucy face in the mirror. So I did both! At the same time. Laughing as a few tears streamed down my cheeks. Pent up stress leaking out, you know.

My life lesson from these mishaps? They're just going to happen so I might as well laugh. There are too many real reasons to cry and stress out. An extra nipple on one side is not one of them.

But! If you can save someone, whether friend or stranger, from public em-bare-ass-ment, please DO! You'd want them to do the same for you. 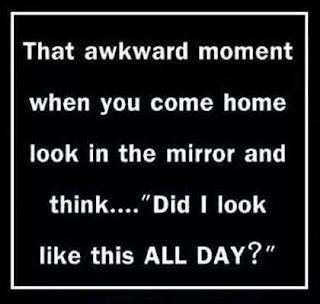