The tiny dark-haired infant was cold and wouldn't stop crying. She had a soaking wet shirt and needed her diaper changed. The poor child was very hungry too...

You might think that this two month old girl had been neglected. But she was in that pitiful condition because her grandmother was babysitting her. Wait! That doesn't sound right! Especially since that grandmother was me.

I'd happily accepted the opportunity to spend time with my youngest grandchild that evening. I had stayed with her only one time previously. Everything had gone very smoothly that first time. In fact, I loved it!

Baby R. was sleeping peacefully in her little portable bed when I arrived. I just watched her doze. What a gorgeous child!

She started stirring a little after about ten minutes, so I went to prepare a bottle.

There were many clean bottles and nipples on the kitchen counter. No problem. There were a bunch of short fat ones and one tall skinny one. I assumed that she usually used the short fat bottles since there were so many of them.

My bundle of joy was starting to fuss. "Just a minute Baby, I'm getting your bottle ready!"
Warm water, formula, put the nipple on... umm, what's wrong here? It wasn't tightening onto the bottle. I tried several times, as the starving infant's cries got louder. The plastic nipple ring just didn't fit!

So I tried another ring. Same problem. How confusing!

My wee granddaughter was getting red in the face by that time. "I'm sorry! I'm trying to hurry!"
I grabbed the lone tall skinny bottle and poured the formula into it, then screwed the top on without a problem. Whew!

I rushed over and picked up R., who continued to wail until I stuck the nipple in her mouth.

She sucked happily for about two minutes. Then she spit it out and started screaming again!
"What?! What's wrong?" Then I noticed that the front of her onesie was soaked. And cold.
"How the heck did this happen?" I put the bottle back in her mouth and checked carefully. Sure enough, milk was slowly drip, drip, dripping from under the twist-on ring. NOOO!

I took the thing off and carefully twisted it down again. Still leaking! And the poor baby was still screaming. (I'd heard that crying doesn't hurt babies and in fact, sometimes it's good for them to exercise their lungs. I was sure hoping so at that point!)

I was trying not to get too frazzled. "Okay, little one, let's get you out of these cold, wet clothes first, then I'll figure out the bottle situation."

The change of activity seemed to distract and calm her for a few minutes. Clean dry clothes didn't hurt either. But she was rather offended when I laid her down in the bouncer again. "I'm so sorry, but I have to go find a bottle that won't leak!" 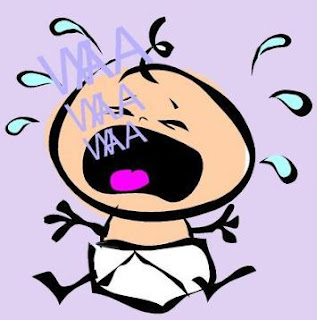 I looked more closely at the bottles this time. All the short wide ones were the same brand, except one. That's the one I just happened to pick up the first time. It looked exactly the same as the others on first glance. Well, no wonder the nipple ring didn't fit correctly! It was a different kind and slighty smaller. SHEESH!

I honestly don't remember why the skinny bottle leaked all over the baby. Just luck, I guess!

Finally, I got it right and fed the starving child. We eventually enjoyed some snuggle time and she even gave me a few little smiles.
Aww, baby bonding with Grandma! Precious.

I was laughing at myself and my ten minute sitcom-like fiasco before that night was over.

I don't know if anyone else will find my Murphy's law experience amusing. (I'm sure it will be only one of many.) But now I have another funny-but-true tale to tell my grandkids someday. I'll refer to it as "The night I won the 'Doofus Grandma Award'" or something like that.
And it will be so much better to hear Baby R. giggle instead of wail.