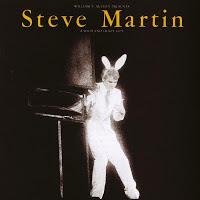 When I was about seventeen, I really wanted Steve Martin's " A Wild and Crazy Guy" album for Christmas.  I'd been hearing clips from that stand-up comedy album on the radio for quite a while. I thought it was the most hilarious stuff I'd ever heard!  His silly song "King Tut" was very popular at that time too.

I did indeed received the album on Christmas morning!  I was so excited!!  After our holiday lunch, I wanted my family to sit down with me to listen to Steve Martin's comic genius.  So we all got comfy, Dad, Mom, little brother, and little sister and me.  "You guys are gonna love this!" I exclaimed.

Soon after I started the record, my parents giggled a little.  My brother too. I think my sister was too young to get it.  A little further into the jokes....laughter turned to silence, then confused expressions, then angry faces on my parents! Apparently my Dad did not appreciate the crude sexual stories and curse words. Suddenly, he jerked that album off the turntable!

I was as shocked as they were! (No, really!)  I sheepishly explained that I'd never heard THOSE parts on the radio clips.  The DJ had only played the G-rated parts. My Dad glared at me with a look that said "Yeah, right." He was NOT amused.

My siblings were confused. We were all having a nice Christmas afternoon, and then, unexpectedly "Oh, Di's in BIG TROUBLE! "

I think my parents did believe my story of innocence and ignorance after the emotions of the moment subsided. That was many years ago, but I would remember if that incident had ruined our whole day....it didn't.

That red-faced, cringing moment is now a funny memory that I am grateful to have. Ah, growing up was fun and painful and awkward and wonderful!  Recalling times like this renews my appreciation for my loving family and our good times together.