Should we all just become Nudists?

I've been thinking about judgment for a long time. I've been considering how we all judge others but we hope that others won't judge us. 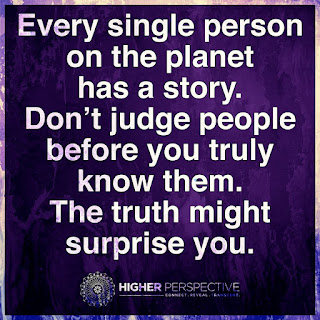 It's fairly normal to make assumptions about people based on what we initially see, read or hear about them. We do this before we know all the facts. That doesn't necessarily make us bad folks, but I think it's important to stop and realize that first impressions might be inaccurate.

You've probably heard the saying "Never assume, because when you do, you make an ass out of u and me.


I watched a lot of TV when I was a child. Like many kids, I thought it would be wonderful to be beautiful, rich and famous someday!

When I got a bit older, I realized that even beautiful celebrities committed suicide sometimes. I don't know why that realization is such a significant memory to me, or how old I was when it happened. But it just struck me that even people who seemed to "have it all" sometimes gave in to the ultimate despair.

(As an adult, I now understand that depression and suicide are very complicated issues and not necessarily related to having or not having "it all".)

I didn't think I was very pretty. We certainly didn't have much money. Fame? No. But I was able to be fairly content overall. I started understanding that material possessions, physical beauty and celebrity status must not be the answer to achieving a fulfilling life. My parents taught us good values and that those things weren't important. But I needed to have my own "light bulb moment" about those issues.

A couple of memories from my teenage years were triggered recently.

When I was a sophomore in high school, I had some classes with a poor little rich girl. I'll call her Natalie. We were acquaintances I'd say, not exactly friends. She didn't let anyone get too close to her. She was gorgeous and she wore beautiful clothing! But she seemed much older than fifteen.

Natalie's parents owned a popular business which carried their last name. She opened up to me about it one time. She confessed that she didn't know who liked her "just for her" or who judged her because of her family's position in town. So she just kept to herself most of the time.

Another friend was a beauty queen. Literally. Our high school held a beauty pageant every year (ugh!) and she won it when we were juniors.
.
One day she and I were discussing boyfriends. I was surprised when she suddenly started to cry. She said "I get attention because people think I'm pretty. I don't think I'm all that great! I never know when a boy really loves me, just for me!  For who I am on the inside!" 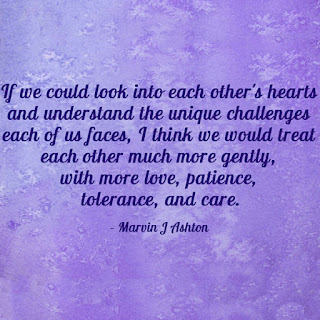 When I was in school with those girls, I would have gladly traded places with them. I even harbored a little jealousy toward both of them. In my immaturity at the time, I was fairly shocked to learn of their personal struggles.

I'd like to think that I've learned a lot since high school- about pre-judging people and situations. But have I really? Have any of us?