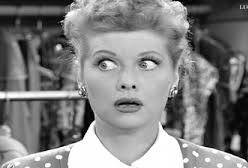 This is another true confessions story. Well, it's two-in-one really.
They are not suggestive nor inappropriate. However, they do involve a bathroom situation and taking my clothes off...

Lucy Ricardo got herself into all kinds of bumbling scenarios, as you know. Well, I happened to get myself into two such dilemmas in the last two days.

Yesterday, I was visiting my mother-in-law at the nursing home. It just so happened that we had a power outage on that end of town while I was there. So the nursing home was using emergency generators only for necessary medical equipment.

So of course, while I was there, I needed to use the restroom. No, I could not wait.
It was extremely dark in there when I closed the door. I managed to take care of my business, including hand washing, just by knowing the basic layout of the bathroom, and feeling my way around. I had only used that bathroom a couple of times previously.  I was feeling quite disoriented.
To make matters worse, when I was ready to go out, I could not get the door open! 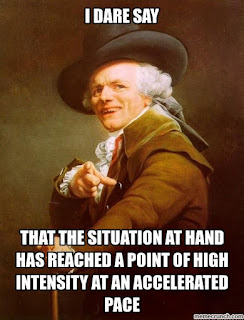 The door had the lever kind of handle. I tried several times, lifting it up, pushing it down. It was locked tight!! After about four tries, I could feel myself starting to panic!
I really didn't want to cause a scene at the nursing home, but...

I finally figured it out- all by myself like a big girl! I was pulling instead of pushing. That's why it wouldn't open. Whew!

My second ridiculous predicament happened at home today while I was doing laundry. But again, it was one of those @%&#! lever door handles that caused my weird entrapment!


The washer/dryer are immediately to the right of our back
door. 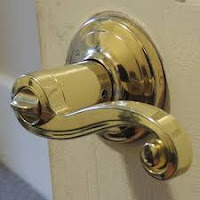 I backed up to the door handle a bit too close. My belt loop got caught on the long, curved handle!
Not only that, but the loop somehow got twisted tightly around it.
I was stuck!

Every time I moved, it twisted more. I was trying to loosen it behind my back. Nope! It was't budging! This was another time that I couldn't even see what I was doing. Oh joy.


I'll be honest now (I mean, I've already embarrassed myself anyway). I am 52 years old and I'm not a gymnast. But I had to do some tricky and agile maneuvers with my body to get out of those pants while attached tightly to the door by my belt loop.

Oww, I think I strained my back!!

You'll be relieved to know that I survived, my pants are intact and no one was here to witness my humiliating sit-com scene.
I don't know though, I've heard of some awkward real-life videos going viral!

Nah, Lucy is still much funnier. I'm just too honest and open for my own good.